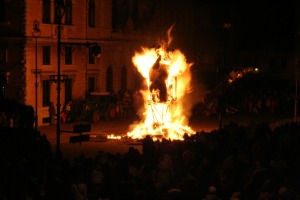 The fire of the “vecia”, in the night of Schella Martz.

The oldest and most important traditional events on the Plateau are related, as elsewhere, to the ancient rites of fields and fertility.

“Schella Martz” (“Sound March”) takes place on the last three days of February, and it is an invitation to the awakening of nature after winter hibernation. Small processions of children drag jars and cans through the streets of the centre and the hamlets. These jars and cans are tied together and beaten with sticks to produce the greatest commotion possible, in order to awaken the spring. The last evening, in the Town Hall square, “la vecia” (the old woman), that represents the winter just past, is burn in a bonfire. 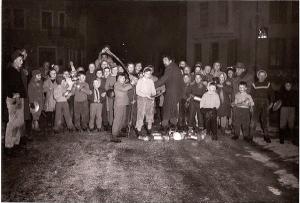 After the “scella marzo,” Mario wrote, “we expected April 25, when the day had become much longer than the night, to run together at the Sagra dei Cuchi,” the cuckoos’ village festival which takes place in Canove to celebrate the Patron Saint, San Marco. “But,” claimed the writer, the day of San Marco also swifts and cuckoos arrive, awakening the forest with their singing, awakening the sap of trees. For me, we do the Sagra dei Cuchi because on April 25 the cuckoos come.”

However, the most important event, especially for Asiago, is the “Grande Rogzione” (Great Rogation), which takes place the day before Ascension. It is a pilgrimage that covers a distance of 33 km all around the borders of Asiago, reviving the ancient agricultural propitiatory celebrations then metabolised and absorbed by Christianity. In this case, they are strengthened by a sturdy people’s identity, which goes back particularly to the vow of the Asiago community during the plague of 1631. The procession is accompanied by ancient chants, and after enriched by intense moments of conviviality. The morning stop at the Lazzaretto for the Holy Mass and breakfast is also an opportunity for making peace between neighbours separated by hostilities, while a characteristic moment is when the girls offer coloured eggs to the males, especially the boys from whom they have received the gift of the traditional clay “cucco” (cuckoo) at the “sagra” of the Patron Saint San Marco. 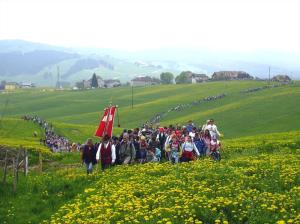 The “Grande Rogazione” in Asiago

“The voyage around the world, dreamed by the immigrant who cannot return to their town,” so Mario described the “Rogazione,” “or remembered by the old man who no longer has the strength to face the journey, can become an embrace of love and nostalgia, a loving embrace with those who understand that life is a journey together, an embrace of nostalgia with those who can find a new happiness in regret.”

The historic route is the subject of a redevelopment project on the Faith Trails by the Veneto Region, along with the minor Rogation trails in Mosele and San Domenico hamlets, and the similar pilgrimages to the Sanctuary of the Holy Mary at Buso di Gallio, to the San Donato’s Oratory, to the Covolo of Lusiana, to the small churches of Santa Margherita in Rotzo and San Francesco in Foza.

For the Plateau’s community, other significant events were the traditional fairs in June, the fair of San Matteo (St. Matthew, Patron Saint of Asiago) on September 21, and the Fair of the Dead, all related in origin to the agricultural activities, but now reduced to mere commercial meetings.

Finally, in some villages of the Plateau, the Festival of the Conscripts still take place. In the past, it was a real ritual of passage for the young men of military age, who were allowed to go wild for a week of jokes, eating and drinking, before their entry into adulthood.