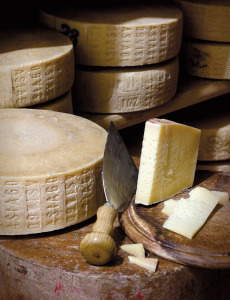 Even the food plays an increasing role in the tourist service: no longer “only” the cheese known throughout the world, with its different maturings, but also butter and “tosella” (fresh cheese to cook), honey and liqueurs. Traditional dishes – apart from the “Considera,” a special mixture of potatoes, white flour, butter, onions and cinnamon which Mario was very fond of – have long been only a thing of the past. The “Cavrizza” – corn meal and milk – the “Mosa” – water, milk, butter and corn meal – the “Kraut” – meadow herbs cooked and pan-fried, not to be confused with “sauerkraut,” the “Pultabrodel” – sausages fried with corn meal – in the postwar period were gradually ousted from the Plateau’s tables to be replaced by the classic national dishes (pasta, soups, stewed or boiled meat).

In recent years, however, the new cuisine on the Plateau tends more and more to put together the “typical” mountain-dwellers’ menus, based on game, mushrooms, cheese, new recipes that creatively rediscover traditional flavours and products, particularly emphasizing local herbs and wood flavours, and even reinventing the “fir broth” “invented” by the Plateau inhabitants to face the hunger during the Great War, or even resins, mosses, roots and berries, in ever more innovative approaches.

Mario used to eat everything, as told by his wife Anna, but he preferred simple and traditional dishes. He was very greedy for sweets, a habit perhaps taken in the family shop when he was a child, when he allowed himself, hiding from his parents, feasts of jam, mustard, chocolate.

A few years ago, in an article for the “Papageno” magazine he recalled the taste with which he had eaten “polenta” (the traditional thick maize porridge of northern Italy) and cheese when he arrived in the mountains of Albania from Asiago in winter 1940. “It was the presence of home, the hearth, the bowl of good milk. Everything, even the meadows, the smell of hay, the sun.” And then, the hard polenta prepared on Christmas 1942 in the Don strongpoint, and boiled turnips “enriched” with stalks of cabbage eaten the year after in the camp. But he also spoke of woodcock and deer fillet, cooked thrushes in an earthenware pan with sage and slices of bacon, and stewed snails and the boiled pork of his youth…

In everyday life, however, he was satisfied also with a bowl of cold milk with boiled potatoes.

Of the first courses he loved especially soups, among others the “Sliba” (barley, cabbage and potatoes) and the “kumo” (caraway) soup, with lentils and potatoes. He also appreciated cabbage soup with sausages and gnocchi or spaghetti with sardines, prepared especially for the carnival. Among the second courses he especially loved stewed veal with polenta.

To serve 3-4 people. Half a kg of cabbage, 6 hg of potatoes, an onion, 2 hg of barley (if it has the peel it should be soaked at least 12 hours before use). Put everything in a cold pot with about 3 litres of water, and boil over a slow fire from two to three hours. At the end of cooking, add pounded lard or a tablespoon of oil.

Similar procedure for the above-mentioned soup. Place an onion in a pot of cold water, half a pound of small brown lentils, a beautiful bunch of crushed caraway. Boil over a slow fire for a couple of hours, then add (to taste) pounded lard or oil.

It is prepared with veal stew, fresh or peeled tomatoes, cinnamon, cloves, a bay leaf and butter. All must boil for a couple of hours, with the frequent addition of meat broth or hot water. Mario Rigoni Stern loved to accompany it with polenta and vegetables from his kitchen garden, primarily potatoes.

Mario loved to accompany his lunch with a few glasses of red wine, especially the Brunello with game. As told, he was greedy for any kind of sweet, preferring perhaps fried cream.