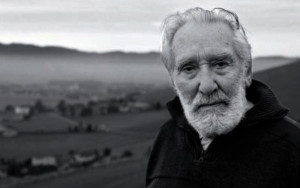 Perhaps no writer has been attached to his land as Mario Rigoni Stern. But even though he became a true icon of his “Altopiano” (Plateau, or “Altipiano”, as he called it in homage to his beloved friend Emilio Lussu), he was able to embody the soul of the whole mountain, of all the suburbs indeed, becoming one of the most influential and universal interpreters of the relationship between man and nature, and between collective history, and personal as well as community memory.

With his clear and deep writing, complex but not complicated, he defined the boundaries, established he meanings, embellished the face of a local identity that he has always conceived as accessible to all those who, despite living in the contradictions of modernity, had a clear gaze and a pure heart. Those feelings of belonging to his community and its history, of respect for nature and the people he has been able to flow from the rocks and the soil of these mountains and the rough bark of its inhabitants, were always interpreted by him not as a sign of exclusion but as an opportunity of sharing, which became willingness to welcome. “We are all neighbors,” he said looking at the wide world and facing its diversity as an opportunity of enrichment.

It is in interpreting this spirit that this site was born, to narrate Mario Rigoni Stern through his places, those places which have seen him play as a child, then grow up and become a man, go to war and come back for no longer leave; those places in which he has set his books, which have seen him become a successful writer, singer of mountains and nature, and finally the most genuine interpreter of the terrible lessons of the twentieth century’s history as well as the desire for justice and peace which it has laid down in the human heart. 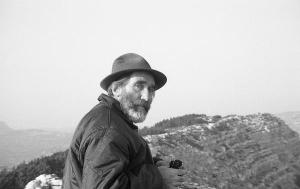 Mario Rigoni Stern among his mountains

“It would be nice if one day, reading one of my stories,” the Sergeant wrote, “someone could identify the place and feel my own feelings and my own emotions.” These words have guided us in the creation of this website, designed thinking of his fellow countrymen, of whom frequent the Plateau, of those who love his work and appreciate its teaching, and up here look for its tracks, the clean air that he has breathed, the knowledge that he has been handed down and the noble sentiments he shared.

For those who would like to learn more about the land of Mario, his mountains, its country, its historical and cultural references, its natural attractions, its ancient traditions and the culture, also either gastronomic and receptive that it expresses, this website then offers some tourist proposals that, in keeping with the philosophy of the writer, are intended to combine the serene harmony of his world with various opportunities for relaxation and enjoyment. Going through “the most hidden and difficult trails,” we all will have an opportunity to learn more about the Plateau and – step by step – even to rediscover ourselves.