A childhood on the Plateau

“I was born in Asiago in 1921, in a house just rebuilt on the ruins of the Great War, in a family that for centuries has exercised commerce between the mountain and the plain, but has given doctors and forest engineers as well,” so Mario Rigoni Stern wrote in his short autobiography, written on the occasion of the Premio Chiara’s career award in 2003.

It was the night of November 1, and Mario Ilario was the third of the eight children of Anna and Giobattista Vescovi, the most restless and enterprising; three years old, his mother discovered him while, with a hammer, he was hitting an unexploded bomb found in the garden, risking to blow up.

Go to THE FOUR HOUSES  itinerary 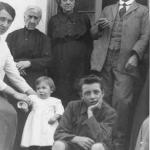 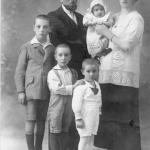 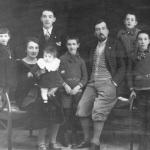 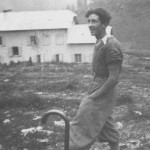 “The crisis of the thirties led to the economic decline of our large family,” Mario wrote, recalling the generosity of his family in granting credit to its poor clients. “But who cared about us kids? I loved more playing than studying; skiing, wandering through the woods, exploring distant places.” The great loves of his life, mountains and reading, soon appeared. Next to Salgari and Verne, at school he read the classics such as Dante, Manzoni, Nievo, and later on his own account Conrad – during a brief escape in the mountains for a family quarrel he brings “Typhoon” with himself into the backpack – Stevenson, Tolstoy, and books about the Great War, like those by Frescura, Lussu, Monelli.

“Literature is a forest,” he said later, recalling his Masters. “There are big and beautiful trees that exceed the others, and they are called Homer, Thucydides, Virgil, Dante, Boccaccio, Cervantes, Shakespeare, Leopardi. Where the alpine forest thins out and the mountain becomes bare, there grows the smallest tree in the earth: the dwarf willow. In the forest of literature, I’m a dwarf willow.” At age fifteen, Rigoni Stern concluded the Secondary School, and at seventeen he volunteered in the Military School of Mountaineering in Aosta, where he earned the title of “skilled skier-climber.” 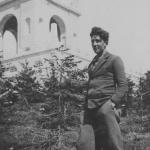 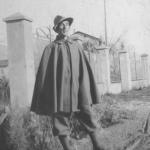 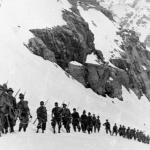 Promoted to Corporal in February 1940, he was assigned to the 6th Alpini Regiment as an instructor of mountaineering and skiing. “In the bag,” wrote in his autobiography, “I kept two little books: Dante’s Divine Comedy and “Il fiore perduto della lirica italiana dal Trecento all’Ottocento” (The lost flower of Italian poetry from the fourteenth to the nineteenth century), then lost, “casus belli,” through the steppes towards Stalingrad in the summer of 1942. At the outbreak of the war he took part as a dispatch runner in the operations against France on the Alps and against Greece on the Albanian mountains, later in the winter of 1941-42. After a brief return, in the following summer he was sent to the Russian front with the first skier battalion Cervino and then with the Vestone battalion of the Tridentina division.

“I took part in the defensive battle that summer in the meander of the Don,” he wrote, “in the winter battle on the middle Don and the great retreat of the Alpine Army Corps,” events that would have marked his life forever and determined his fate as a writer.

Go to THE OTHER PLACES OF MARIO RIGONI STERN 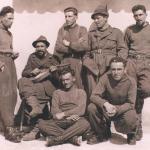 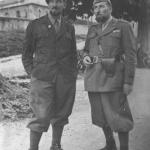 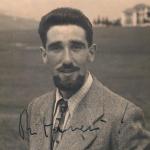 Back in Italy, after September 8, 1943 he was captured by the Germans. Refusing to join the Republic of Salò, he ended up imprisoned in a camp until the end of the war: first Hohenstein in East Prussia (now Olsztynek, Poland) on the border with Lithuania, then Lamsdorf (now Łambinowice) in Polish Silesia, then the Präbichl Pass in Styria, and finally in Graz, where he fled in April 1945. During the detention he began to write “The Sergeant in the Snow,” on sheets he rolled up and tied with a string.

Go to THE CAPTIVITY PLACES

On his return home he dealt with the Library of the combatants, and at the end of 1945 he was hired as a “temporary clerk of third class” in the Land Registry. This was the period in which he developed his readings of foreign authors unknown during fascism, such as Hemingway, Kafka, Lorca, Eliot, from the French and Russian literature to natural history. On 22 May 1946 he married his classmate Anna Maria Rigoni Haus, and in March 1947 the first son, Alberico, was born.

In the winter of the same year he kept a friend company while this one was confined to bed, reading his memories of the retreat from Russia. This friend, the sculptor Giovanni Paganino, convinced him to copy and send them to Elio Vittorini, consultant at Einaudi.

Meanwhile, his superior, a former Fascist militant, transferred him to Arzignano, from where he managed to return to his town after three years of sacrifice. Meanwhile, in 1950 the second son, Giovanni Battista, was born.

Go to the BARENTAL itinerary 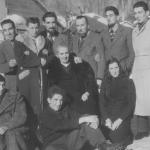 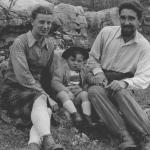 “The Sergeant” and his first books

Finally in March 1953 “The Sergeant in the Snow” was published, warmly welcomed by readers and critics and awarded with the Viareggio Prize in August of the same year. At the ceremony Rigoni Stern knew, among others, Giuseppe Ungaretti, Diego Valeri, Carlo Emilio Gadda, Paolo Monelli, Arnoldo Mondadori and Adriano Olivetti.

In the following years, he continued to work in the Land Registry, but also began to collaborate with some magazines and became a town councillor. In 1955 the third son, Ignazio, was born.

Italo Calvino decided to gather the Rigoni Stern’s short stories in a book, “The wood of the capercaillies,” which was released in 1962, and with which the author earned the appreciation and friendship of Primo Levi. The same year he began to build his new home, in a field adjacent to that of the director Ermanno Olmi, in Valgiardini, in a hill called Kunstweldele (artistic grove) where he used to stay with his father in law returning to the village in the days of hunting.

In those years he collaborated with “Il Giorno,” with other newspapers and with the Italian public broadcasting company (RAI), and continued his work as a clerk, until 1968 when he nearly died due to a severe heart disease. After a long convalescence in 1970, he retired from work. 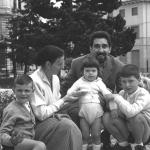 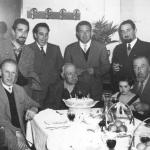 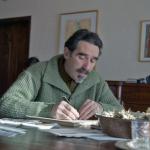 Once retired, Rigoni Stern intensified his literary activities. He published “Quota Albania” and took a trip with his wife to the places of the Russian campaign, of which he will talk about in a series of articles and in the book “Ritorno sul Don” (Return to the Don).

In the seventies he was at the forefront in raising awareness against the overbuilding of the Asiago Plateau, and participated in the initiatives of the “Gruppo Salvaguardia Sette Comuni” (Group for the Safeguarding of the Seven Municipalities) that contrasted the short-sighted management of tourism in those years. He wrote: “We see buildings of ten apartments or even more rising in Asiago, houses for the seven dwarfs, and forests polluted by fragments of bottles and plastic wrappers; trees, flowers, mushrooms torn.”

It emerges with even greater precision in its public figure, next to that of guardian of the memory, his profile of witness and defender of the mountain, with a sober and authentic lifestyle. In those years, he was also town councillor again in Asiago in the list of the Left wing.

In 1977 he began to work with the newspaper “La Stampa,” and in 1978 he published “The story of Tönle”, “my most successful book,” he said. The following year he won the Bagutta and Campiello awards which finally put him among the greatest Italian writers. The “Trilogy of the Plateau” will be finished by “L’anno della vittoria” (The Year of the Victory) in 1985 and “Giacomo’s seasons” in 1996.

In the eighties and nineties he travelled a lot, both to return to the places of war and captivity (where he carried out newspaper articles and television reports), and to attend the meetings to which he was invited to talk about his books and his life, but also the many awards: in 1998 he was awarded the honorary degree in forest science by the University of Padua. The year after, his video interview with Marco Paolini, directed by Carlo Mazzacurati, is presented at the Venice Film Festival, and finally, in 2003, the President Ciampi gives him the honour of “Cavaliere Ufficiale di Gran Croce” (Knight Officer of Grand Cross); he was repeatedly considered as possible senator for life, and was also nominated for the Nobel Prize.

In the meantime, in 1998 he published “Sentieri sotto la neve” (Paths under the Snow), which he defined “a book steeped in memory, a collection of voices against the silence of history and identity,” and in 2002 “L’ultima partita a carte” (The last game of cards), “a summary of my military life and of the maturation process that led me to the rejection of fascism and war.” 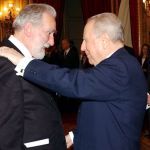 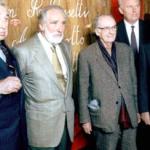 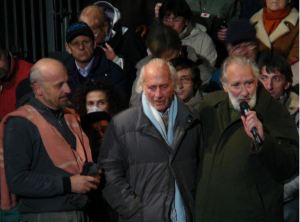 Aged over 80, he told himself “I love to walk in my mountains, to ski, to grow vegetables; I write when I have something to say.”

In his later years, he published other books of short stories, including in 2004 “Aspettando l’alba e altri racconti,” (Waiting for the Dawn and Other Stories), and he received the Premio Chiara Lifetime Achievement Award, the Masi Award (together with Andrea Zanzotto), and also obtained the honorary citizenship of Montebelluna and Florence.

He was called by the Veneto Region to participate with four other Wise Men in the drafting of the fundamental principles of the future Regional Territorial Coordination Plan, which was organically collected in 2004 in a document entitled “Charter of Asiago.” “I am more and more convinced that these mountains of ours,” said the writer in the document, “behind the industrialised cities with their unbearable traffic, together with the sea will be the salvation of the daily life of those who are forced to work there.”

In 2006 he celebrated his 85 years of age by calling all his translators at a conference in Asiago, then he published “Stagioni” (Seasons), and got a big personal success by participating in the Fabio Fazio’s TV broadcast “Che tempo che fa.”

The following year he was also awarded an honorary degree from the University of Genoa, he won the Recanati Prize and was appointed “Commander of Arts and Letters.” On October 30, at the Cava Arcari di Zovencedo (Vicenza), along with Lieutenant Nelson Cenci, he was attended the first theatrical adaptation of “The Sergeant in the Snow” by Marco Paolini, broadcast live by the La7 TV channel.

In the following months he got sick, and died at his home on June 16, 2008, on a spring day as he would have liked. By his express wish the news is given only on the following day, after the funeral.

Go to THE GRAVE