History of the Asiago Plateau

Home > History of the Asiago Plateau 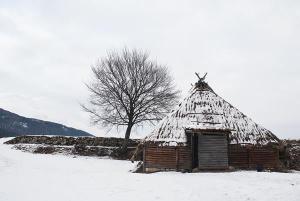 The reconstruction of a house in the Bostel (ph: Sergio Dalle Ave).

The first signs of a human presence on the Asiago Plateau, by Neanderthalian groups of hunters or flint-stones gatherers, date back to the Middle Paleolithic period. The traces of seasonal passages, even in later times, have emerged in numerous caves and rock shelters in various places of the Plateau. Just to mention the main sites, you go from the Cava degli Orsi and Grotta Obar de Laute, at Bisele on the confluence between the Gelpach valley to the Val d’Assa, to the Riparo Battaglia, at Prunno near Asiago, the Riparo Dalmeri, northern part of Marcesina, Val Lastaro in the territory of Conco, and Monte Corgnon at Lusiana. The sites of Cima XII and Grotta d’Ernesto (Marcesina), occasional bivouac of hunters, belong instead to the Mesolithic, between 9,100 and 8,200 years ago.

Significant evidence from the Mesolithic to the Neolithic Age and the early stages of the Metal Age are instead absent. The human presence on the Plateau restarted and became more stable since the beginning of the Iron Age, with the Rhaetian villages of Bostel (Rotzo) and Corgnon (Lusiana). The discovery of the oldest evidence of human presence on the Plateau is due to Abbott Agostino Dal Pozzo, born in Castelletto di Rotzo in 1732 and died in Bassano in 1798, who described history, environment, language, culture and economy of the Plateau in “Memorie istoriche dei Sette Comuni vicentini” (Historical memoirs of the Seven Communes of Vicenza).

GO TO THE PLACES OF THE PREHISTORIC AND ANCIENT TIMES 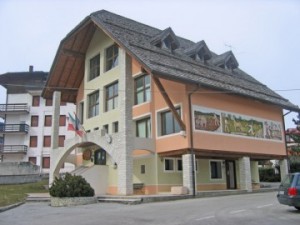 Very little were instead the remains from Roman times, only findings of coins in the Altaburg (Rotzo) and Enego areas, perhaps signs of a military presence for the control of the strategic Astico Valley and Val Brenta.

However, the Plateau, excluding its outer areas as Rotzo and Enego, remained indeed largely uninhabited until the tenth or eleventh century, when the colonization by woodsmen, shepherds and farmers of the Pedemontana was consolidated, with the support of the Ezzelini family that had feuds on site. 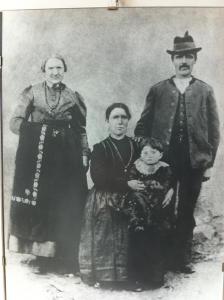 This presence, however, was quickly absorbed or overwhelmed by a considerable migration, in successive waves, of Germanic peoples, then called Cimbri, which involved substantial areas of the high Veneto but that here ended up becoming dominant. On its origins there are still divergent interpretations, but since then and up to the First World War, the Asiago Plateau was largely an enclave of German cultural and linguistic diversity, characterised by a vernacular close to the Bavarian dialects and religious events related to Norse mythology, of which the spectacular rock of the Altar-Knotto above Rotzo was a testimony. 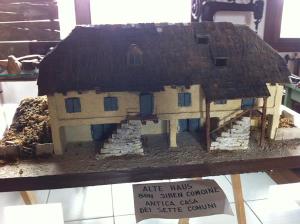 An ancient house of the Asiago Plateau

Mario Rigoni Stern, analysing the historical topography of the Plateau, attributed instead to the “Cimbri” Scandinavian origins. “What is certain,” he wrote in “Sentieri sotto la neve,” “is that we are living differently from other parts of Italy. There were no masters because pastures, woods, the mountains belonged to the community (still today, over 80% of the Plateau is property of the “originals,” who have the right of public use) (…) It was unpopular to look for a wife outside the borders, and a woman who married a stranger had to refund all received for education or health care. All public offices were elective, and once terminated the mandate, no one could be re-elected.”

Now the Cimbrian language is known by very few people, especially in the area of Roana, where a cultural institute for the study of this culture is established, even though since a few years a popular festival widespread in various villages revives its memory. There are also some speakers in Lessinia, while it is still widely spoken in the nearby Trentine town of Luserna.

Mario also called “Cimbro” one of his dogs, to which he was particularly fond of. 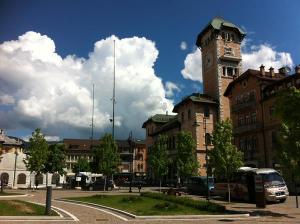 The Regency Palace, today the town hall of Asiago.

In 1310, to strengthen the territorial bonds and to defend their autonomy, the communities settled on the Asiago Plateau founded the “Spettabile Reggenza dei Sette Comuni” (Respectable Regency of the Seven Communes), defining themselves “dear brothers” in the insignia. It was an independent federal government, characterised by the collective ownership of the land, still present today, which lasted until 1807 when it fell by hand of Napoleon. The dwellers of the Plateau, in exchange for autonomy and privileges on trade and tax, allied to Venice in 1405, and for four centuries they guaranteed supplies of timber and the defense of the borders to the north, in particular against the Habsburg imperial army. An eventuality that did not take long to occur. After repeated skirmishes with Vicenza, the troops of the Respectable Regency gradually had to confront the invading armies of Sigismund of Austria (1487) and Maximilian I (1508-1509), as well as the French general La Palisse, the men of Charles V and finally Napoleon. The successes of the latter marked the end of the Regency, which ceased to exist in 1807, first annexed with Veneto to the Kingdom of Italy, and subsequently submitted to the Habsburg Empire. The last Chancellor of the Regency was Angelo Rigoni Stern, grandfather of the writer.

The union with Italy

After the Austrian domination, characterised by a political-administrative centralism that soon favoured the emergence of the Italian sentiments of the Risorgimento. With the Third War of Independence (1866), the Asiago Plateau passed to the Kingdom of Italy. A man that stands over the others in this historical period was the patriot, engineer and politician Cristiano Lobbia (Asiago 1826 – Venice 1876), which was the first commander of the “Legione Cimbrica” (Cimbrian Legion), a corps of 800 volunteers who valiantly fought against the Austrians, then participated to the “Expedition of the Thousand,” built the road of the Costo, then became member of the Kingdom of Italy in 1867. He denounced the scandal of the tobacco monopoly, but his strenuous and popular fighting against corruption earned him many powerful enemies, who first ordered an aggression (the beating that bended his hat gave rise to a new trend, the “Lobbia hat”), and then forced him to a long legal battle.

The period that followed the annexation of the Plateau to Italy was characterised by a phase of infrastructural modernisation (construction of the bridge of Roana and the railway, new aqueducts, electrification, and the beginnings of tourism), but at the same time, by the persistence of pockets of poverty, determined also by the crisis of the traditional activities, which was followed by a massive emigration either seasonal or permanent, especially to South America.

GO TO THE PLACES OF THE UNION WITH ITALY 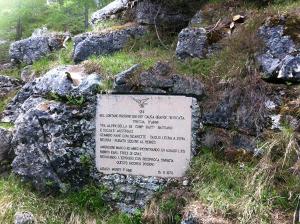 The stone plaque on Monte Forno.

Precisely its location on the border projected the Plateau in the centre of the conflict between Italy and Austria in 1915. Despite the common membership in the Triple Alliance, both countries in previous years had done a massive strengthening of borders, through the creation of fortifications and other works of war.

Just from one of these, the Fort Verena, was fired the first cannon shot on the morning of 24 May, and soon the Plateau found itself completely overwhelmed by the conflict. The Austrian commands had in fact identified in the Vicenza’s high territory the “door” to break through to spread in the Veneto plain, and to this goal they were faithful for the entire duration of the war, that never had, then, true moments of respite up here. The brief “war of the forts” was followed, in May 1916, by the “Strafexpedition,” which led for the first time the Austrians to reach the southern edge of the Plateau, but without achieving the expected breakthrough. The war forced the population to escape, and caused the destruction of Asiago and the neighbouring villages. The war continued with battles always very bitter between the Melette di Foza, Monte Zebio, Monte Ortigara, the area of Cesuna and that of Tre Monti, until the final result in November 1918.

After the return of the population, in 1919, the reconstruction would last many years, and would have returned a geographic, social and cultural “landscape” completely different from the past. A special chapter was written by the “recuperanti” who, picking up remnants of war to make ends meet, contributed to the first complete reclamation of the Plateau, and then to the reconstruction of the memory, now entrusted to museums and collections, but also to the great Ecomuseum of the Great war, made by recovering forts and trenches.

GO TO THE PLACES OF THE FIRST WORLD WAR 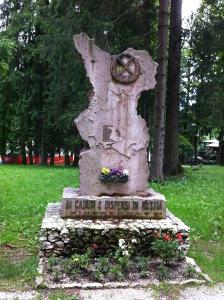 Monumento to the fallen and the missing soldier in Russia, at the Remembrance Park of Asiago.

The plateau was again in the front line during the Second World War, after 8 September, when it became the scene of some of the major episodes of the Resistance. Several partisan groups were formed up here, first in the area of Fontanelle, Conco and Rubbio, whose militants, however, fell into the hands of the Nazi-Fascists before being shot in Marostica. To counter the strengthening of the rebels, aided by the Anglo-American air supplies, the Germans decided to intensify the mopping-ups, one of which took place on June 5, 1944, culminating in the battle of Malga Fossetta, where, among others, the group of students of Vicenza known as “the little masters,” gathered around Antonio Giuriolo and Luigi Meneghello, was involved. A path below the summit of the Isidoro commemorates their sacrifice. Other significant events were the arrests and the burning of Camporovere, August 8, 1944, and especially the fight of the following 6 September among thousands of Nazi-Fascists and 600 partisans in the Bosco Nero and Granezza (40 fallen), followed again on April 27, 1945 by the Massacre of Treschè Conca, with 19 deaths among partisans and civilians.

The support of the population in the clandestine struggle yielded a silver medal for military valour to the town of Asiago and a bronze medal the municipality of Conco.

GO TO THE PLACES OF THE SECOND WORLD WAR 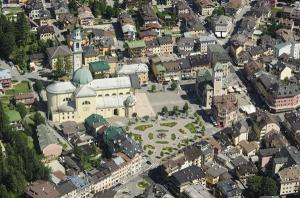 An aerial photo of the center of Asiago (ph: Sergio Dalle Ave).

After the war the emigration from the Plateau resumed, but also a significant economic development began to be recorded, catalysed mainly by the huge increase in tourists in the Sixties, which was followed by a tumultuous and often chaotic urban expansion. To which later, however, an emergence of a growing environmentalist conscience followed, with the knowledge that the improvement of the landscape values and the historical and cultural heritages of these lands is an indispensable opportunity not only to improve the quality of life of the inhabitants, but also to make possible a sustainable tourist and economic development.

This evolution of the collective feeling is partly attached to the uneasiness, that in recent years, with the worsening of the economic crisis not only on the Plateau, against the national and regional central governments, which has resulted also in a referendum for the transition to Trentino. A possibility, however, that Mario Rigoni Stern, even though he shared the most part of the troubles and resentments of his fellow citizens, has always fiercely opposed.

Currently, the population of the Plateau has stabilized on 21 thousand inhabitants, and Asiago alone has about 6500.

GO TO THE PLACES OF THE ARTS AND THE CULTURE